FLORENCE AND THE GALLERY UFFIZI 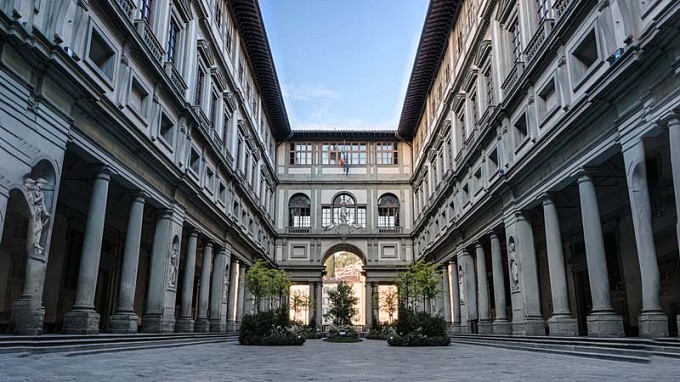 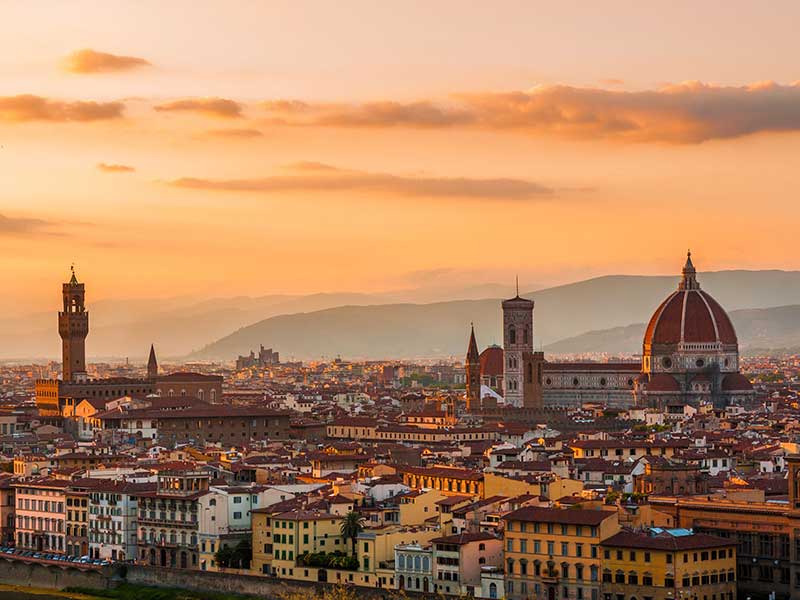 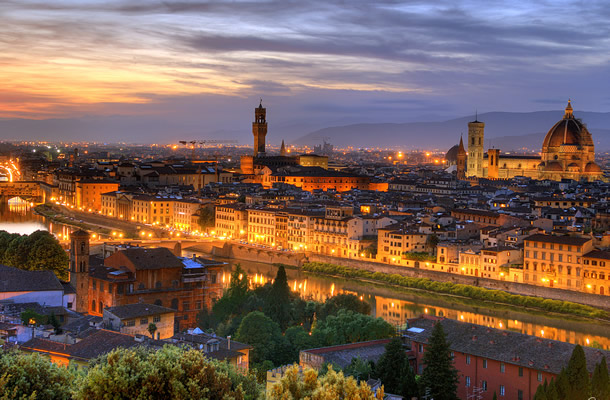 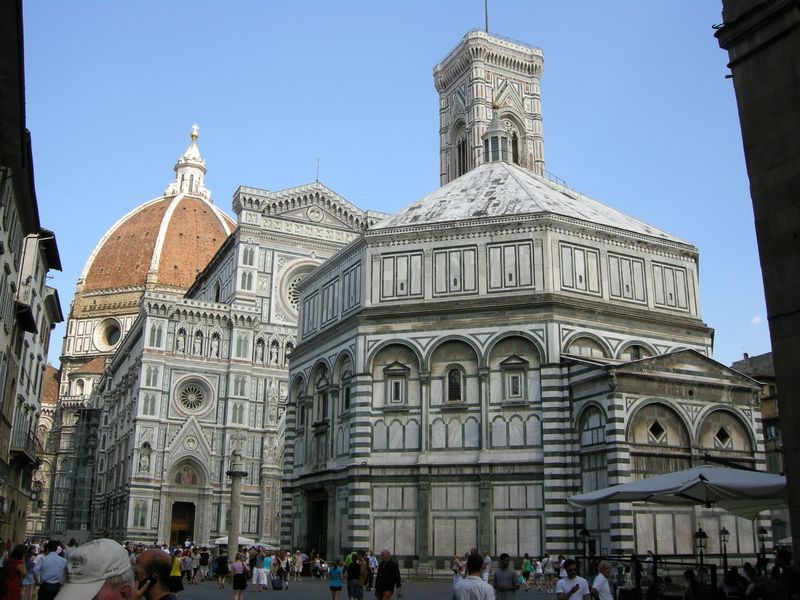 Early morning departure from the places and meeting places provided, along the highway to Padova -Bologna. Stop at a motorway along the way and continuation to Florence, one of the main destinations of international tourism, for the extraordinary richness and the high quality of its monuments and art collections. Upon arrival meet your guide, entrance and visit the Uffizi Gallery which houses the most 'important masterpieces of Italian and whose building and' the greatest masterpiece of Florentine architecture of the sixteenth century. Lunch / snack in the cafeteria free Uffizi. Continuation of the afternoon visit to the city of Florence. With a pleasant walk cross the Ponte Vecchio and admire the most 'famous architectural forms of historic Florence. Of great interest are: the Palazzo Pitti, Piazza della Signoria with Palazzo Vecchio and the Loggia della Signoria, the Baptistry, Giotto's bell tower. Weather permitting we will reach even to the Piazzale Michelangelo from which we can see the most 'beautiful view of the city'. Evening departure for the return trip along the highway to Bologna, Ferrara ..... Stop at a roadside restaurants along the way and continue to Padua ....... Evening arrival at destination.


The Uffizi Gallery in Florence is one of the most important Italian museums, and one of the largest and best known in the world.
The building houses a superb collection of priceless works of art, deriving, as core, from the collections of the Medici, enriched over the centuries by bequests, donations and exchanges, highlighted by a fundamental group of religious works derived from the suppression of monasteries and convents between the eighteenth and nineteenth centuries. Divided into various rooms prepared for schools and styles in chronological order, the exhibition shows works from the twelfth to the eighteenth century, with the best collection in the world of Renaissance works. Inside are hosted some of the greatest masterpieces of humanity, made by artists ranging from Cimabue to Caravaggio, through Giotto, Leonardo da Vinci, Michelangelo, Raphael, Mantegna, Titian, Parmigianino, Dürer, Rubens, Rembrandt, Canaletto , etc.). Is the unparalleled collection of works by Sandro Botticelli. Of great value is also the collection of ancient statuary and especially that of drawings and prints, preserved in the Cabinet of the same name, is one of the most conspicuous and important in the world.
In 2013 it was visited by 1,875,785 people for a total gross income of 9,385,527.25 euros, making it once again the most popular Italian museum.


Construction began in 1560 is realized by adopting the Doric order, according to Vasari, "safer and more firm degl'altri, [...] always loved the Lord Duke Cosimo" in 1565 had already completed the so-called Uffizi Lunghi and the part overlooking the Arno.
The Uffizi palace consists of two buildings longitudinal main, connected to the south side by a shorter quite similar, thus giving rise to a complex "U", which covers a large square and smashes prospectively towards Piazza della Signoria, with a perfect shot of the Palazzo Vecchio and its tower.
The three buildings have the same form: the ground floor a porch lintel covered with a barrel vault, consisting of bays separated by pillars with niches and divided into three intercolumni by two columns placed between the pillars; in this module are three openings in the above fake mezzanine serving illumunare to the porch and three windows on the first floor which presented the alternation between triangular gable and curved gables and are between pilasters; Finally the top floor loggia resumed tripartite form and was later hosted the original "gallery" Uffizi.
On the ground floor a porch runs along the length of the west and south sides, and to the east side to via Lambertesca; raised on a podium of some steps, the porch is made of Doric columns and pilasters with niches for statues that support an architrave, but is covered by long barrel vaults, decorated with rectangular frames in relief, which are connected by bands disegnanti a geometric pattern broken.
The porch lintel is a great novelty in the history of architecture, as the medieval arcades, and then the Renaissance, were made up of a series of arches and lintels ever, both in Florence (such as the hospital's portico of the Innocents) and elsewhere, apart from the Senatorial Palace of Michelangelo that fact is one of the models of the project Vasari.
On the upper floors is repeated a form of three panes, three windows with balconies and gables respectively triangular, circular and triangular back (first floor) and three openings on the upper loggia (today the gallery on the second floor), divided by two columns. The plans are divided by majestic cornices. The architectural elements are emphasized by the use of stone (especially that extracted from the valley of the shelf), which stands out on white plaster, in the style most typically Florentine started by Brunelleschi.
The short side is characterized by a large arch that frames a serliana component spectacularly overlooking the Arno, surmounted by a loggia, open both on the square in front of the Arno that, as a real theatrical backdrop, inspired by contemporary achievements spectacular. On the ground floor we report the statue DiGiovanni dalle Bande Nere, by Themistocles Guerrazzi. On the first floor the large windows have a scoronamento arc and in front of the central one, the larger, corresponding to the internally Verone, there are three statues: Cosimo I standing by Giambologna (1585), flanked by the personifications lying Equity and the rigor, both of Vincenzo Danti (1566). In the niches of the pillars of the porch was designed to include a number of statues of famous Florentines, the construction began only since 1835.
Very original is the portal ("port of Prayers") built by Bernardo Buontalenti via Lambertesca is crowned with broken pediment, but for greater originality Buontalenti reversed the two halves, getting a kind of eardrum "wing", reminiscent of the ideas animalistic and organic of its architecture.
In 1998 the architects Arata Isozaki and Andrea Maffei won the international competition for the design of the redevelopment of Piazza Castellani on the back to turn it into a new output of the Uffizi museum. After many vicissitudes, the final design was completed and approved by the Ministry of Culture in February 2009 and is waiting to be realized.

Payment methods: it is required a deposit of 25% at the time of registration and the balance before departure.

The fee includes:
- Travelling with Coach Gran Turismo
- Entrance to the Uffizi Gallery
- Support for a guided visit of Florence in the afternoon
- Medical and health insurance

The fee does not include
- Lunch, other inputs, personal extras and anything not specifically mentioned in "The fee includes"

Additional notes
-For lunch, not included in the participation fee, ability to organize on the spot by the companion.Ear